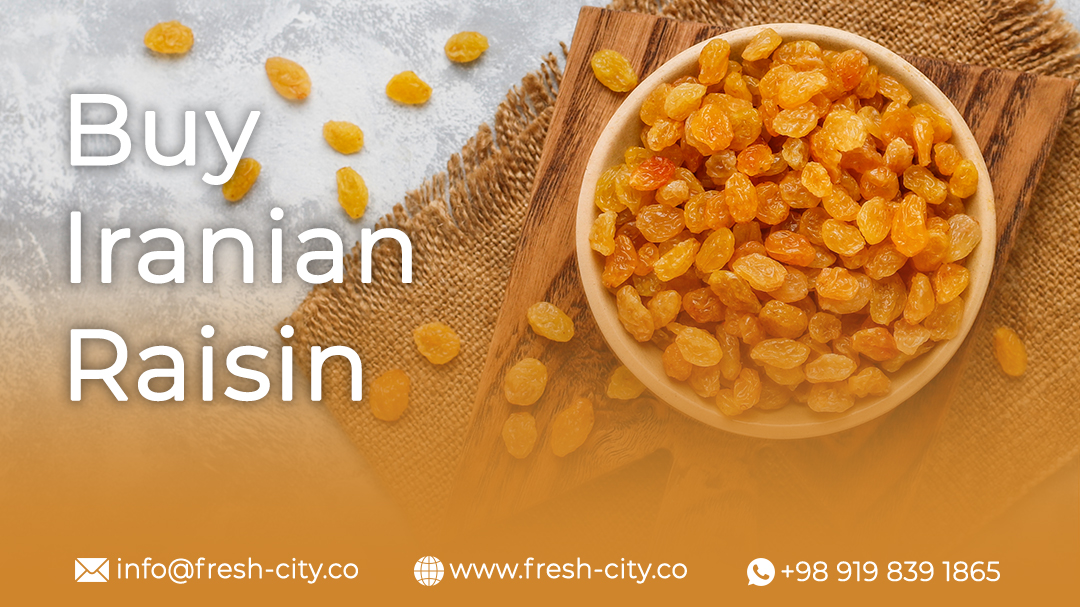 Iranian raisins are bought by many countries in the world.

You can use the following links to contact sales experts.

One of the regular buyers of Iranian raisins is Iraq.

Iraq is one of the best raisin markets that sells a lot every year.

Iranian raisins are also available for purchase in Iraq.

Also, according to the needs of customers, packaging is designed with the desired volume and special type.

It is possible to do the private label required by the buyer.

One of the special features of Iranian raisins is its unique taste and special sweetness.

Among the raisins produced in different countries, Iran has always been able to get a good position.

The presence of tasty grapes that grow in Iran makes raisins also have a good taste.

The reasonable price of this food has made it possible for buyers to sell this product in Iraq with an acceptable profit.

Kazakhstan is one of the main buyers of Iranian raisins.

It is also a gateway for trade and food products to Russia.

Existence of laws similar to Iran’s export laws has caused the import of Iranian products to this country to increase.

Yemen is one of the countries close to Iran that supplies its required raisins from the Iranian market.

Due to the proximity of the two countries, the transfer of raisins is easy.

The taste of the people of this country is compatible with this food.

Also, due to its use in the confectionery and food industries, raisins have become one of the most widely used foods.

Poland is one of the customers of Iranian raisins.

Despite the large number of consumers in Poland, the supply of Iranian raisins is always necessary.

Sultana, golden, etc. raisins are sent to this country with proper packaging.

There are also all standard grades of raisins in this company.

Armenia, as one of Iran’s neighbors that shares a border with Iran, is a customer of this product.

The use of raisins in the food industry of Armenia has made this product have many buyers in Armenia.

One of the major cities producing this product is also close to Armenia, which has greatly contributed to the export of raisins.

This food can be used as a nutrient during the day.

There are suitable packages in the Armenian market weighing 5, 10 and 12 kg.

The existence of various food industries as well as various chocolate companies in Italy has increased the country’s need for food.

Raisins with extraordinary and unique nutritional properties are used in other industries as a useful food.

The unique taste of Iranian raisins has made European countries always pay special attention to this product.

All the standard certificates and ISOs required for this product are available in Fresh City Company and buyers can easily buy the required raisins from Iran.

Raisins are a global and international food.

Bulgaria is also one of the buyers of Iranian raisins.

You can buy all kinds of Sultana and Golden Raisins from our company.

Suitable packaging in the Bulgarian market with different qualities is available for buyers.

Syria is one of the importers of Iranian products.

Trade relations between the two countries have existed for a long time and the Syrian market is a good place to supply Iranian products.

There are suitable packages in the market of Arab countries and buyers can easily sell this product.

On the other hand, the geographical proximity of the two countries has increased the speed of transportation, which is an important feature for buyers.

Due to its geographical location and proximity to Europe, it can be a suitable market for Iranian raisins.

On the other hand, the short distance between the two countries can speed up the transportation of this product.

The food taste of the Turkish people is also compatible with this product.

Due to the fact that Turkey is a producer, this country, as one of the sources of raisins, can also provide Iranian raisins to buyers.

Raisins available in the Turkish market have low humidity and high quality.

Pakistan, with a common geographical border with Iran, is one of the countries buying Iranian raisins.

These beneficial and nutritious properties have made it one of the most popular foods in Pakistan.