Saffron is considered as the most valuable and expensive spice in the world due to its unique properties and the effort expended to produce it.

So saffron price is very high.

Saffron is a part of Crocus Sativus Lineas herb that flowers only once a year.

This valuable product is picked from lilac flowers every morning and they should not be exposed in sun before picking.

This product is completely organic and Iranian saffron is known as “herbal red gold” in the world.

Iranians believe that consuming saffron causes happiness and eliminates sadness and grief. Iran is the largest producer of saffron and 90% of the world’s saffron (approximately 380 tons per year) grows in Iran.

Fresh City Company with its brilliant history in the field of supply, processing, packaging and export of nuts, can provide a variety of parts and types of Iranian saffron for dear customers.

In general, saffron threads are composed of stigma (upper part of saffron) and style (stem), threads of saffron can be presenting in many forms by the cutting part selection. Each of which has its own value and has differences to others. 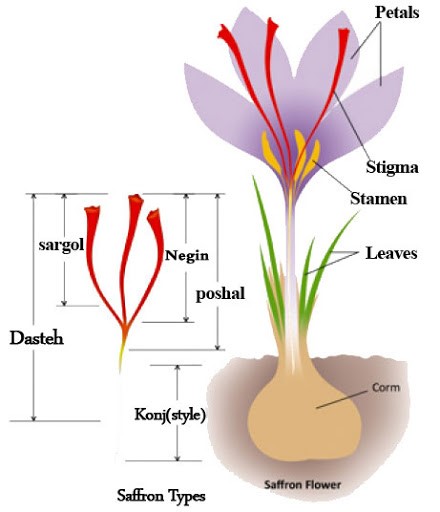 In this quality of saffron, the upper part of the dark red stigma is selected and separated so all the white and orange parts of the stigma are removed completely.

it has the highest quality Compared to other types.

Sargol saffron is pure saffron and is considered as first class saffron.

It has reading ISO 260-270. Stigmas Flower are the rich source of saffron and due to the accumulation of active components of saffron in its upper part, Persian Sargol has a very strong aroma and color.

Negin and Sargol are the same in terms of quality and color, but in terms of size and shape, Negin is a bit bigger and thicker and is considered as more luxurious.

Sargol moisture should be max 8 %

Although Sargol Persian is considered as the best part of saffron, but Negin saffron is the most expensive type of saffron and its supply is very limited so this kind is rare.

If three stigma threads are connected and a cluster is obvious and formed, this type of saffron is called Negin. Because the production of Negin saffron is a very delicate and needs manual skill, the ISO reading value of Negin is usually more than 270.

Negin moisture should be under 8.3%

The best saffron threads, which are collected in the proper way and arranged according to their size and dried within the first 24 hours after harvest, create a beautiful red color that is called Super Negin.

Super Negin moisture should be fewer than 8.2%

pushal saffron is a whole part of the stigma which is attached to 1-3 mm of the end of stem (style). According to ISO 3632 system, this type is in the second grade category with up to 250 ISO reading.

Although Pushal saffron is not pure as Sargol and has not excellent quality but also pushal saffron has a strong and excellent aroma and many consumers prefer to use Iranian Pushal to be sure of saffron quality.

This saffron is produced in the early stages of the harvest season.

Pushal saffron contains a certain amount of style and stigma, so it contains more yellow parts of the stem thread and the yellow texture can be seen in it.

Dry pushal saffron should not be placed in a hot environment because this factor can cause problems for saffron.

pushal saffron moisture should be fewer than 7%

The first product of saffron is bunch saffron, which is the most common form for trade between farmers and producers, bunch saffron has names such as khooshe,cluster and dokhtar pitsch.

In this type of saffron, saffron threads are dried in cluster.

This grade is of a lower value than the others (reading ISO 70 to 75) and consists of red stigmas with a large amount of yellow stems. Bunch saffron is also called yellow and red saffron.

Bunch saffron moisture should be fewer than 8%

The konj of saffron is the yellow or white parts of saffron threads that are separated completely from the red parts. In fact, this part of saffron cannot be defined as pure saffron.

This substance does not contain dye and color.

crocin in saffron which gives food a rich golden color, is not present in this type.

Saffron konj is mostly used for medicinal purposes or even when we only need aroma.

After removing and cutting “Negin” from “bunch Saffron “, the end part remains.

This part is known as “konj” or “white” in Iran.

Saffron is a spice with a strong and special aroma and is also very colorful. This spice is also rich in antioxidants that have many benefits for the health of the body. Evidence and experiments on saffron shows that saffron consumption increases well mood, sexual strength and fights against oxidative stress.

Generally, saffron consumption is good for most people and can be added to any diets simply.

In ancient Iran, saffron was used as a perfume or medicine.

In the old palaces of the royal family, saffron was used for coloring papers, important letters and significant written prayers.

Also saffron used for dyeing silk and other fabrics.

Iranians normally use saffron in the most of the sweets they make for the Iranian New Year (Nowruz).

Also, saffron is widely consumed as a special seasoning and flavour in Iranian kitchens.

Saffron combination with a variety of Iranian foodstuffs gives a special and unique taste to foods.

Saffron is used in the production of traditional Iranian desserts such as”chole zard”, kachi, etc., saffron mixture with other foods can be applicable to decorating a variety of foods, desserts and sweets.

The Greeks claims that saffron first came from their country, but a stronger hypothesis shows that saffron was first cultivated from Iran.

So let’s take a look at this fact that Iranians are currently the biggest producer of saffron in the world.

During the one-month harvest season, which begins in mid-October, every day more than 400,000 people in South Khorasan of Iran wakes up before sunrise, go to the fields and harvest lilac flowers then transport them in baskets for processing and packaging.

The stigmas are carefully removed by hand then sorted and packaged .

These levels normally should take place very fast to ensure that the full flavor, aroma and color of this “red gold” will reach the consumer.

Saffron should be stored in a proper container in a cool environment such as a refrigerator (25-30) before packing and it can be stored for a long time at a normal room temperature away from direct sunlight after packaging.

The fresh city company with its professional records in the field of exporting dried fruit to all over the world, can implement all necessary actions for transferring, shipping and exporting the products

Saffron has different prices depending to type and grade:

Please be in contact with our sale experts via whats app or email for notifying the latest price for saffron.