After Iranian dates, raisin has the highest export volume. The export statistics of Iranian raisin are considerable, and the reason is the strategic nature of this product in the world. Iran is one of the leading exporters of raisins globally, with more than 150,000 tons per year.  Iranian raisins have unique properties and are known worldwide for their variety and their excellent taste. Their advantage is their reasonable price and high-quality, and different processing methods. So, various types of Iranian raisins are exported annually to many countries around the world. This is why Iranian raisins are among the best raisins globally and have always been warmly received by the people.

Raisins are the ripe and dried fruit of grapes; much of their moisture is taken to increase shelf life and usability for other uses. These fruits have different names due to the type of drying. Like other nuts, they are found all over the year. According to the grapes type, the method and conditions of drying and the permitted additives, they are sold in different names in the market.

It is believed that humans discovered raisins when the grapes were drying. But it took several hundred years to determine which grape variety produced the best raisins. More than 200 varieties of grapes are named in different languages in Iran, but it was evident that most of these names are related to a case that has found other words in different places. 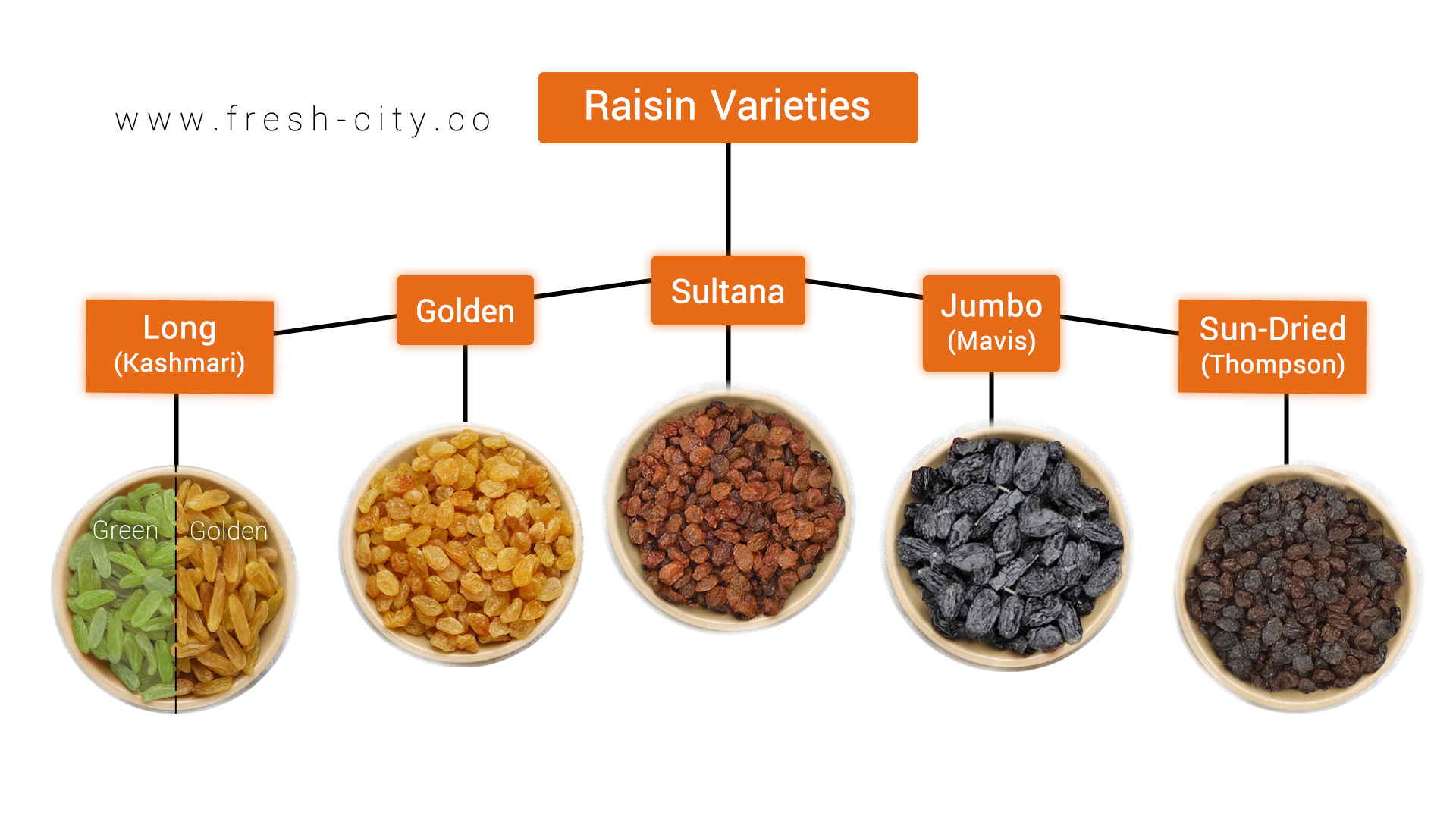 Golden raisins are very popular worldwide because of their unique color. This type of raisin is one of the most delicious raisins in Iran, with many demands in Iran and abroad.

Kashmari raisins are unique raisins among Iranian raisins due to their excellent sweetness, high quality, and free from contamination and no contact of the cluster with the soil. This type of raisin has a good share in the market due to its excellent characteristics, and has two types, including long green raisins (green kashmari raisins), and long gold raisins (gold kashmari raisins).

Sun-dried raisins are products made from different types of ripe grapes, in which the grapes are spread directly in the sun without any additives to dry them. 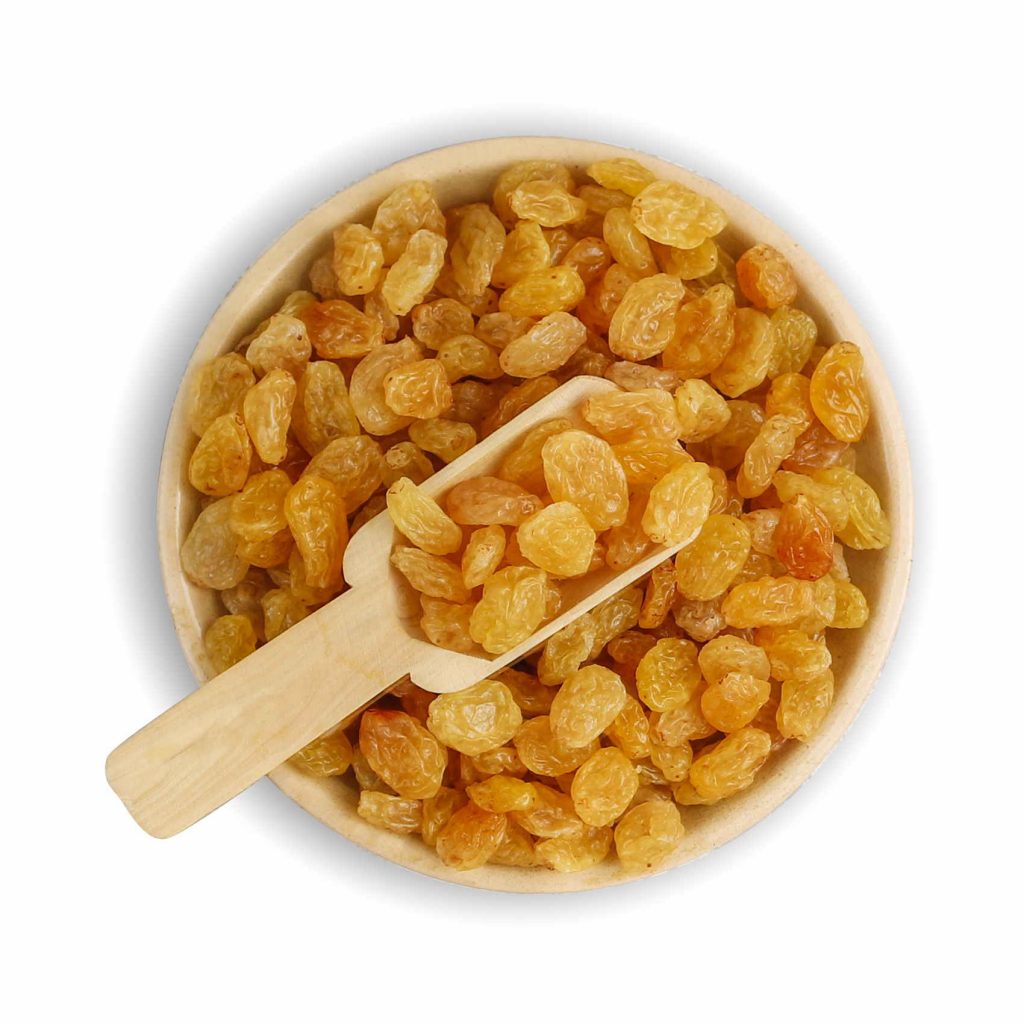 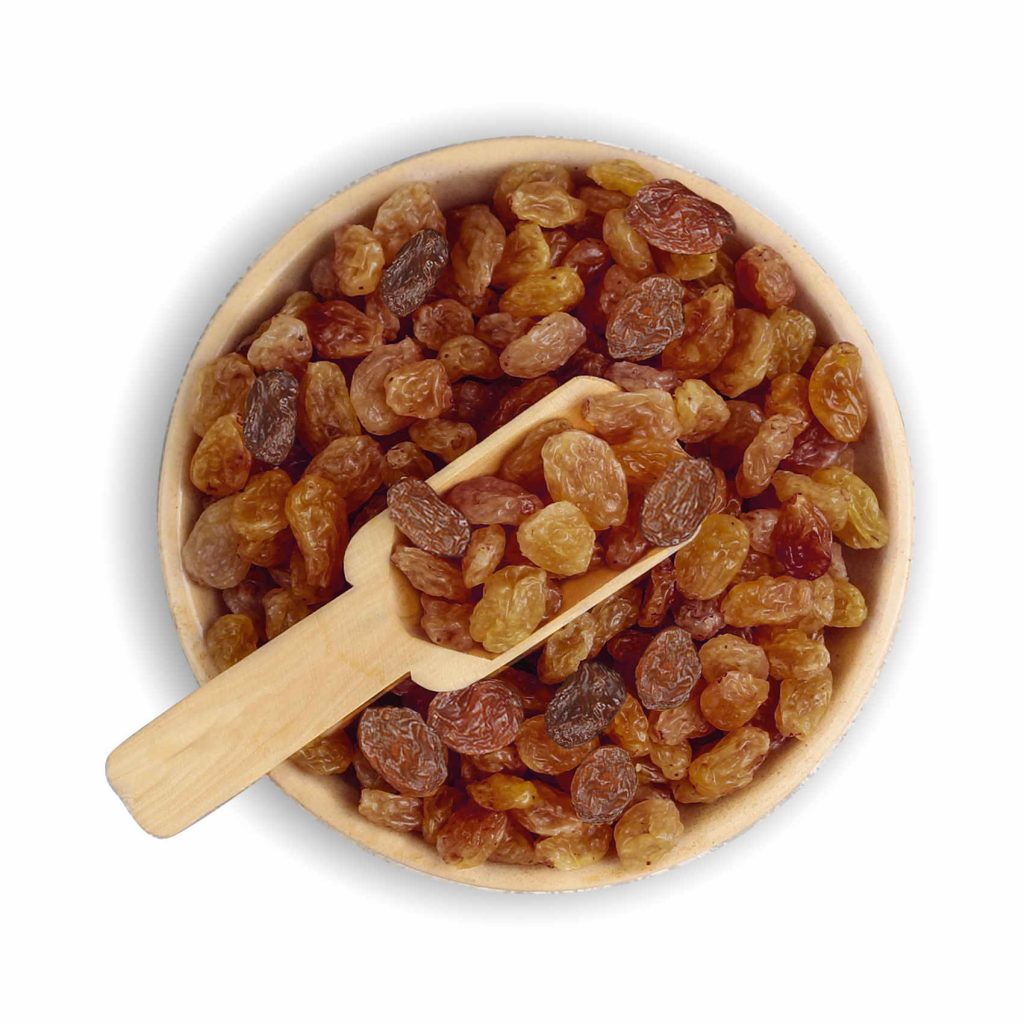 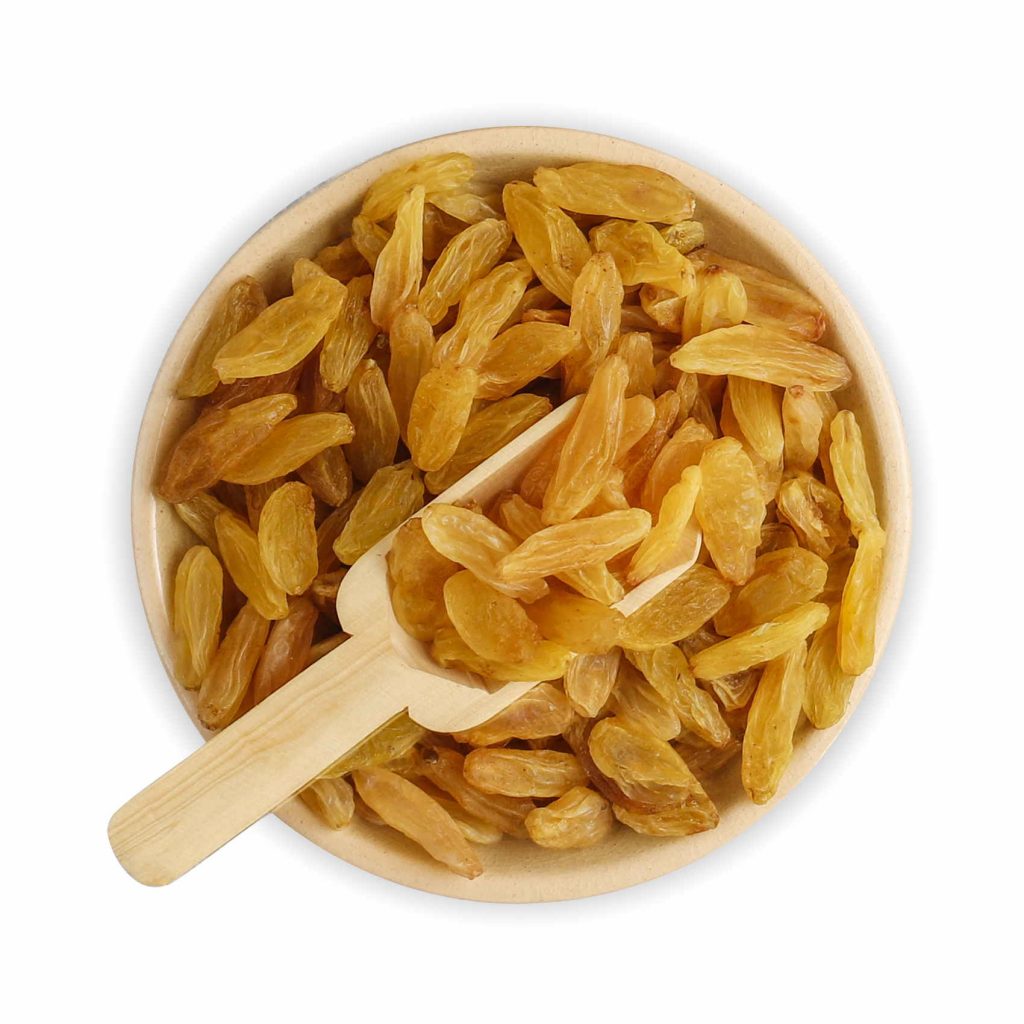 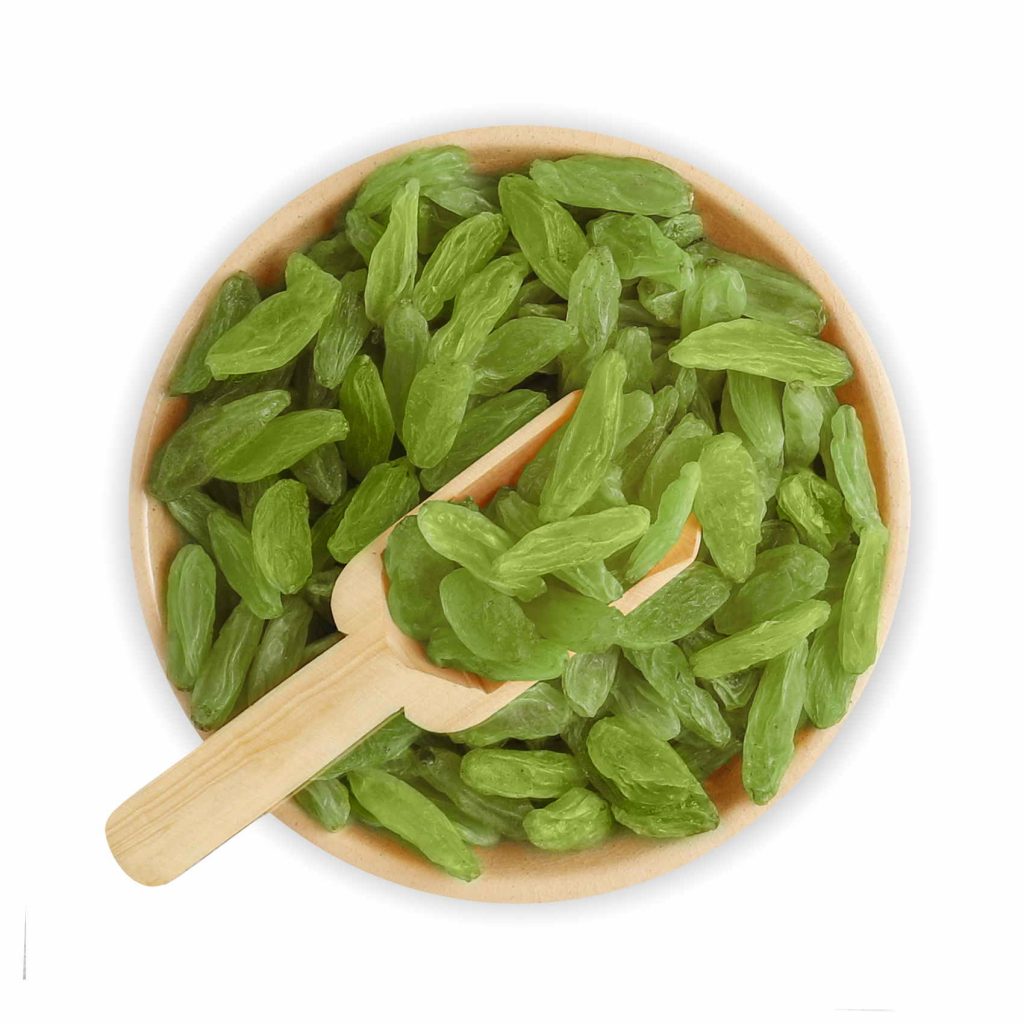 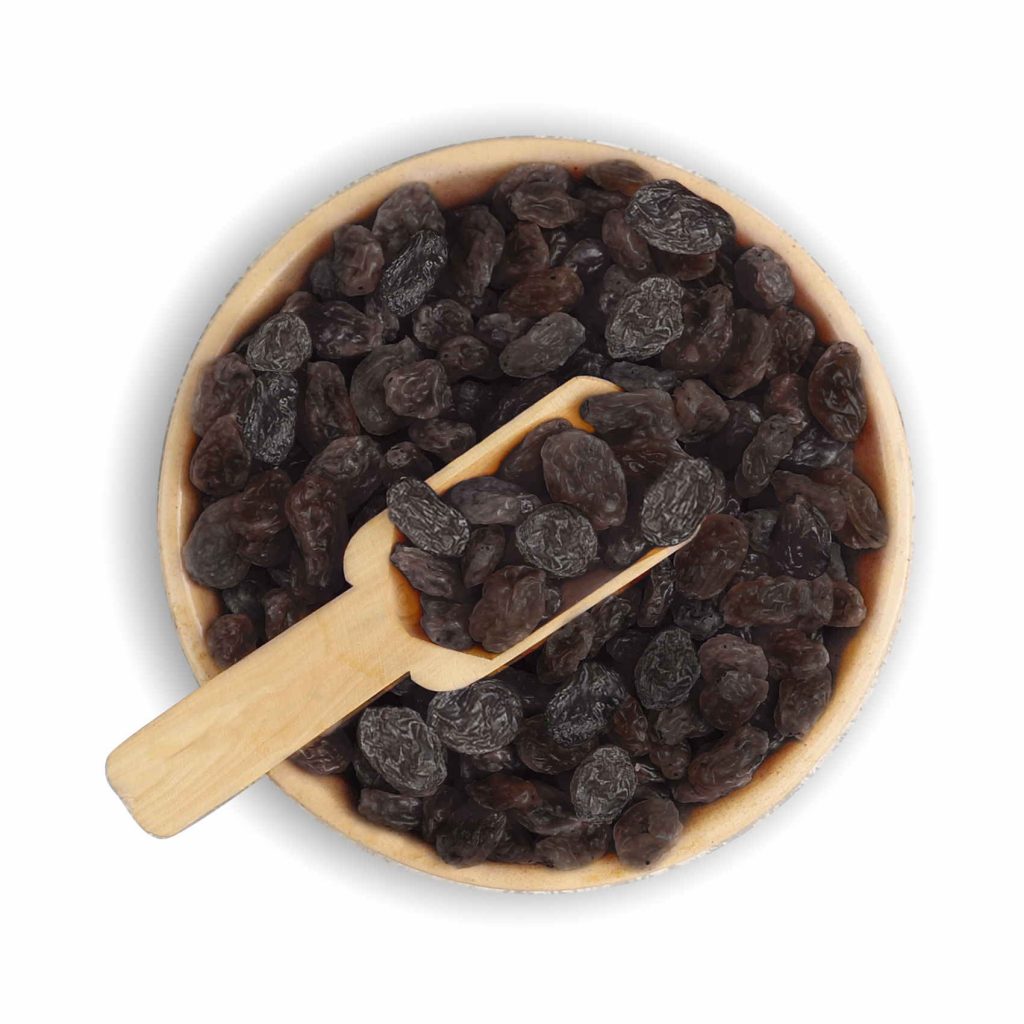 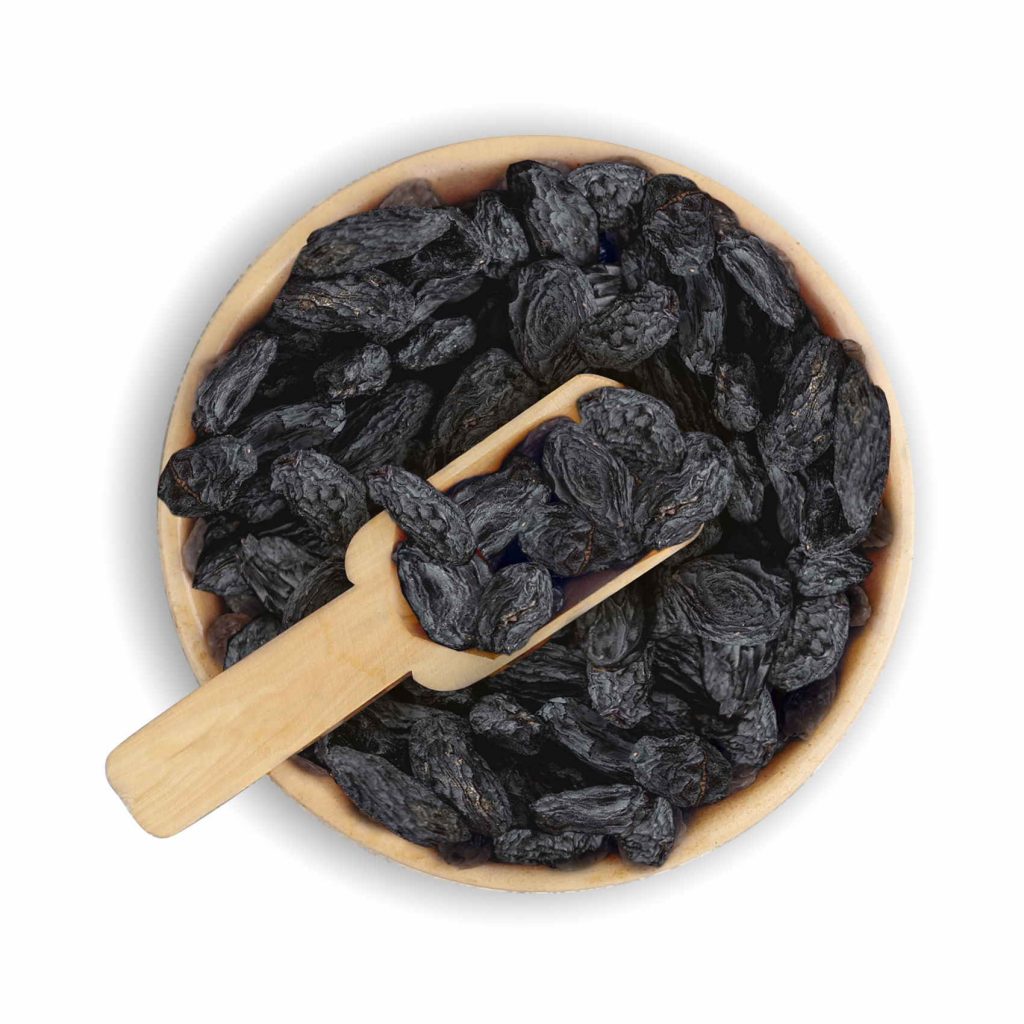 With its many years of brilliant history as various types of Iranian raisins manufacturer, Fresh City Company has created the best type of raisins in the country by observing the current world standards. The company is proud to produce the best kind of Iranian raisins and export them to many countries worldwide, including India, Russia, Malaysia, Indonesia, Pakistan, East Asian countries, Arab countries and the Persian Gulf countries and Europe. The company wants to create an atmosphere in which it can capture the global market of Iranian raisins with its mass production and shine the name of Iran in this global market.

Seedless, seeded or green raisins must be packaged following international standard requirements. Containers for raisins should be fresh, healthy, clean, previously unused, dry and odorless and made of materials that, while having sufficient strength, do not reduce the quality of the product and do not harm the health of the consumer. If cardboard or wooden boxes are used to pack the raisins, an internal nylon bag should be used to prevent possible contamination so that the raisins do not come into contact with the cardboard or wood. Fresh City Company, as Iranian raisins wholesale supplier, observes the world standard in Iranian raisin packaging. Also, this product is always available in the company’s warehouses and has a high expiration date. This Iranian raisin wholesale supplier offers this product in bulk and various weights. As one of the largest Iranian raisins exporters, Fresh City Company guarantees the quality of this product and packaging and has been successful in achieving this goal to date.

Raisins are edibles that have unique properties due to their polyphenols, antioxidants, flavonoids, and various nutrients. Raisins are a high-energy, low-fat, low-sodium food. Therefore, eating raisins is very useful for people who should follow low-sodium diets. Raisins have antioxidant properties and prevent cell damage. Raisins also play an essential role in bone health and preventing osteoporosis. Raisins are a good source of vitamin D and the hormone estrogen. Although Iranian raisins are sweet and sticky, it can even be said that this dried fruit prevents tooth decay and is very useful for the health of teeth and gums. In general, it can be said that raisins are a good source of vitamins and nutrients for the body. Elements and vitamins such as iron, potassium, calcium and vitamin B are present in raisins.

The methods of preparing each Iranian raisin are different. The most common forms of preoducing various raisins include the following:

For drying sun-dried raisins, seedless grapes are exposed to the sun and dried without any operation. Golden raisins or yellow raisins are slightly different. In this method, the grapes that have been spread in the roofed place for drying are exposed to the permitted additives for several hours, and the obtained raisins acquire a golden yellow color. In drying Sultana raisins using processing materials, the drying time of the grapes is shortened, and the largeness of the grapes is maintained during drying. In drying the grapes, the grapes are washed thoroughly to remove the contaminants and dust from the grapes. The water is taken out, and the grapes are poured into the grape and raisin dryer, and in a short time, the interstitial water of the grapes disappears. In drying Kashmari raisins, the arranged clusters are first placed in the basket, and then the basket is immersed in the processing materials and catalyst for one minute. The basket is then separated from the solution and placed on the net surface to absorb water. In this method, the clusters are dried in the shade or indoors. 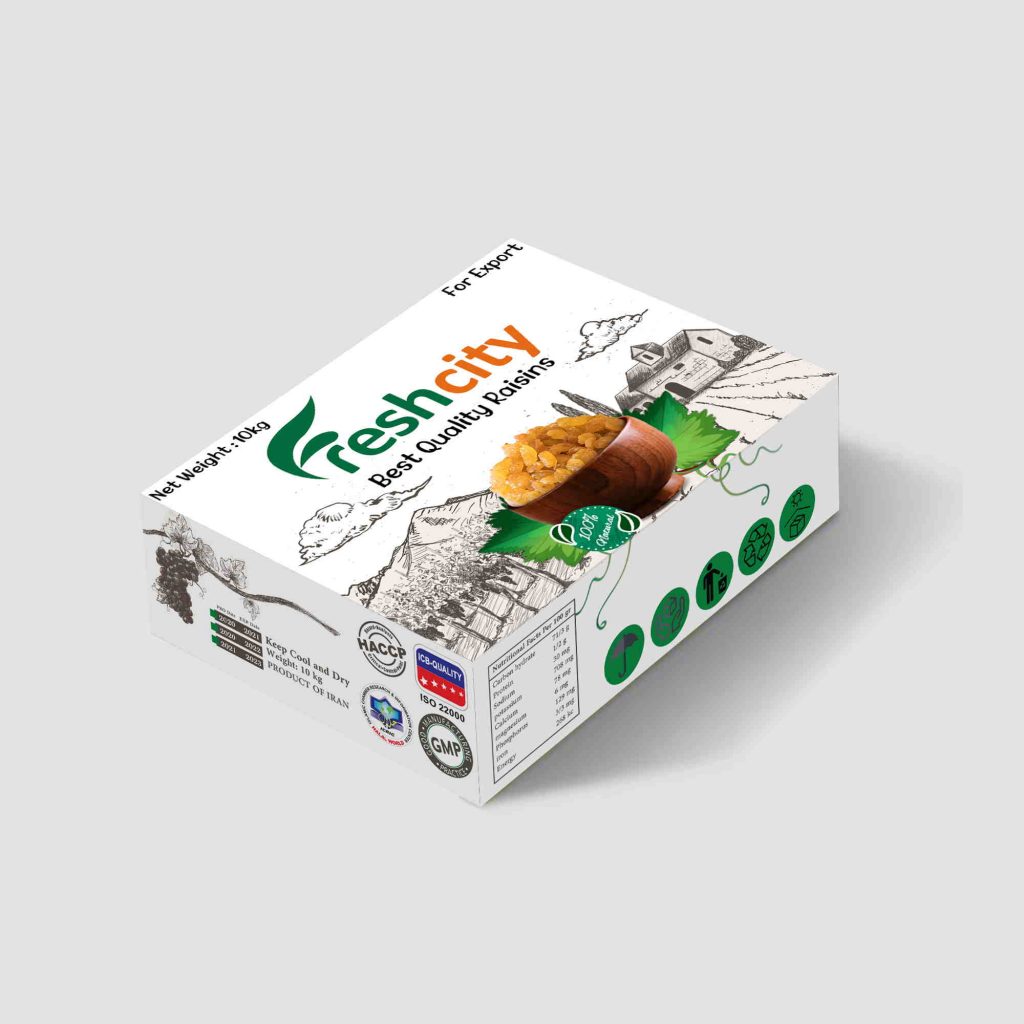 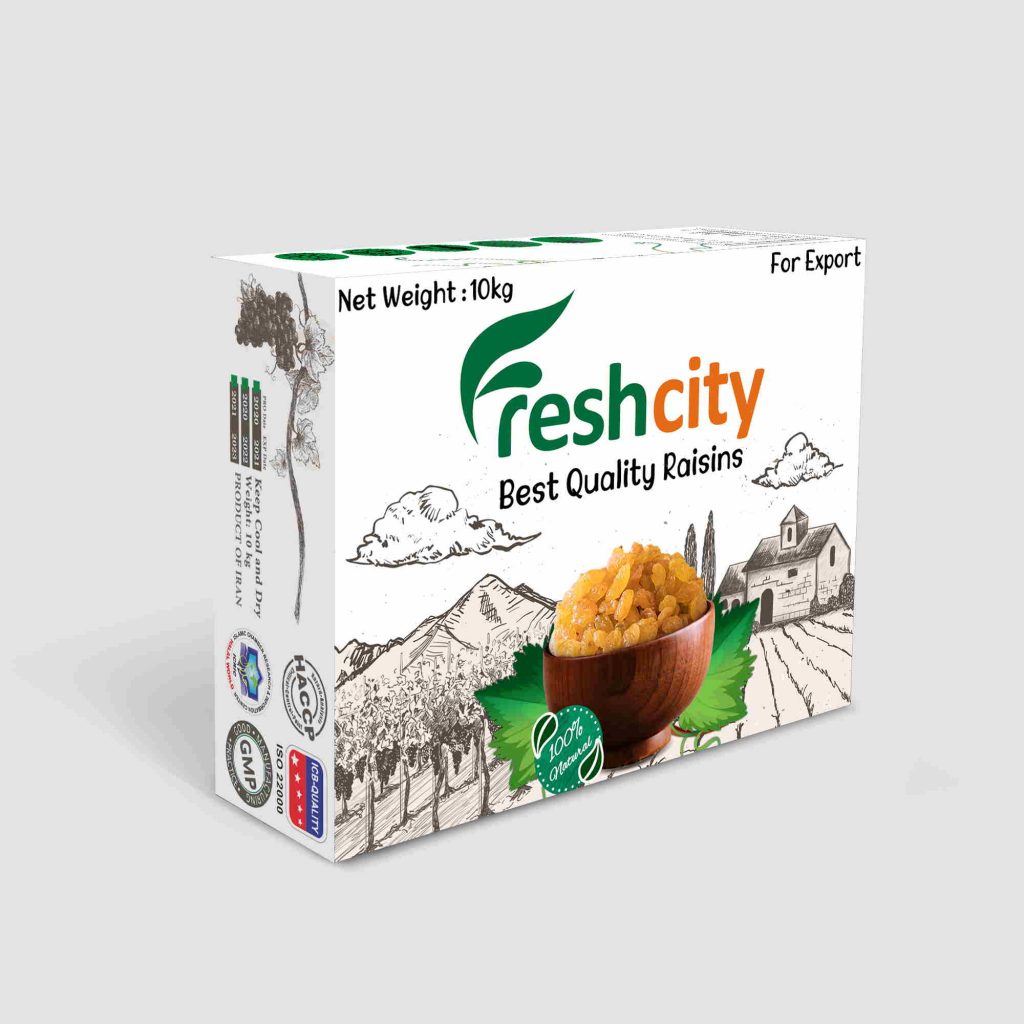 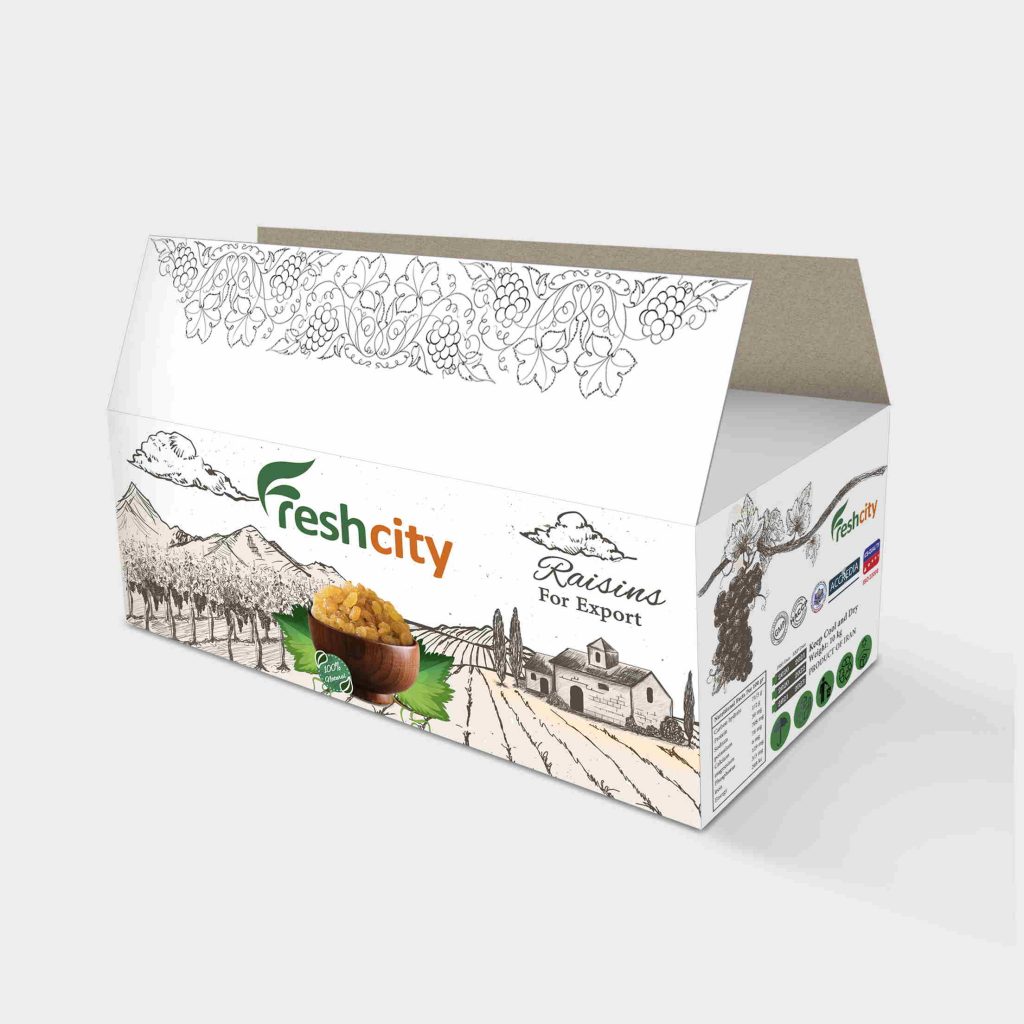